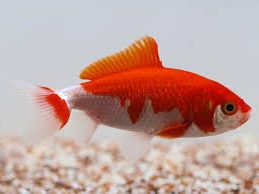 The wakin goldfish is a popular breed in Japan. It’s thought to be the common goldfish of East Asia. The Wakin goldfish resembles the comet goldfish with an elongated body but has a double caudal tail fin much like the fantail goldfish, only shorter. Only the wakin and jikin goldfish have an elongated body and double anal and caudal fins.The wakin goldfish is a hardy breed that is best placed in a goldfish pond. If it’s placed in a goldfish tank, the tank should be large enough to accommodate its growth of over a foot long (30cm). It’s not an aggressive goldfish breed but is a fast swimmer with a big appetite and so the wakin goldfish isn’t a good tank mate for any slow swimming goldfish breeds. the appetite of the wakin goldfish can be a problem if the tank or pond contain live aquatic plants that it finds tasty.The most common colors of the wakin goldfish are a solid red or a variegated red and white color. The ideal balance of red and white colors should be half and half, but some goldfish might only contain a few small stripes of red on an otherwise white body; or vice versa. The reds should be deep and colorful, great for a goldfish pond. Other colors include metallics or variegated: oranges, yellows, browns and blacks.