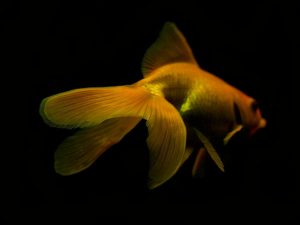 The veiltail goldfish is a popular type of goldfish among collectors and hobbyists but it a variety that is difficult to breed for showing. It’s long flowing paired caudal is the veiltails most prominent feature. the caudal tail fins should not be forked or have pointed tips but be completely divided while viewed from above. When your veiltail goldfish swims, the caudal tail fins should flow elegantly in the water.Its dorsal fin should not fold over or sag but rather it should sway like a flag in the wind. The pectoral and pelvic fins should be long and narrow.Color wise, the veiltail goldfish can be metallic self-colored (solid), variegated (multiple colors) or calico in color. The colors should strong and run into its fins.This goldfish type is not as hardy as the common, comet or ryukin goldfish but it can survive in an outdoor goldfish pond if the conditions are not too extreme. Most goldfish owners will choose to place their veiltail goldfish into their indoor aquariums.