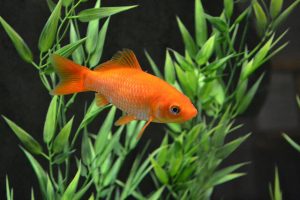 Carassius AuratusAsian in origin, the common goldfish is a member of the Cyprindae fish family. The common goldfish is related to the many species of carp, koi and other types of breeds. The name Auratus literally means “overlaid with gold”. This species of fish has been raised by humans for over a thousand years and sometime during this period, they became family pets.The common goldfish is a great fish for beginners since it’s a very hardy breed of goldfish. It can live in water with temperatures ranging from 55-80*F (12-26*C), with a pH of 6-8, which is much like tap water. The common goldfish doesn’t require a heater and needs only minimal care if placed by itself in a well filtered 10-gallon aquarium (38 liters). In the wild, you can find these in freshwater, lakes, rivers, canals and even ditches that have adequate vegetation. This water can be slow moving to stagnant. They do best in cooler water around the low 70s.Goldfish are however social animals and would benefit from having a tank mate. You can keep two of three small goldfish (a few inches or less) in a 10-gallon tank but when they mature, you will likely need to upgrade your tank size. A goldfish that is properly cared for can live for well over five years (40 years plus max) and grow to around 12 inches long, 32cm (4 inches average, 10cm).A small one-gallon goldfish bowl (3.7 liters) is not highly recommended. When you place a goldfish in a small space like a bowl, the water gets dirty fast and make the goldfish unhealthy. Read the next post for beginners: goldfish bowl size for more info. If space is an issue, consider buying a fancy Beta fish or cold-water minnows which will do better in a small space than a goldfish would.A Beta needs good water parameter too but it also has the ability to breath oxygen through its mouth in addition to breathing through its gills. This just means they can live in stagnant water with low oxygen levels much better than other fish species. Even with this species, you will still need to perform routine maintenance to keep them healthy and happy.