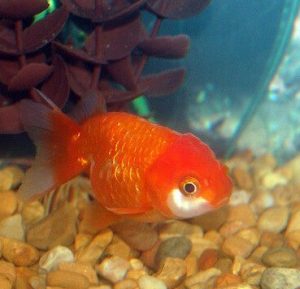 A ranchu goldfish is a full-bodied fancy goldfish that lacks a dorsal fin and has wen hood cover much like the oranda.The back of the ranchu should have a pronounced upward arch where it curves sharply downwards at the peduncle and caudal fins. This curve directs the pair of divided caudal fins downwards. The optimal angle of the back curve and the direction of the upper lobes of the caudal fins should be 90*.One of the most obvious features or lack thereof on a ranchu goldfish is the absence of the dorsal fin. A show quality specimen should have a clean arched back; there should be no sign of a dorsal fin, whether that be a bump or depression where the dorsal fin might have grown.The ranchu’s wen hood cover should be larger than that of the oranda. It should cover the entire head and face but not the eyes. A full wen hood cover can also cover the cheeks and gill covers and resemble the mane of a lion. The Chinese version of the ranchu is called the lionhead for this reason.The ranchu goldfish from Japan and the lionhead goldfish from China are virtually the same breed with only minor differences in appearance. The back of the lionhead goldfish type lacks a serious arch and the curved peduncle is nonexistent. This allows the caudal fins to be more upright instead of being pointed downwards.A ranchu goldfish can be a metallic self-colored orange, red-and-black or a variegated multiple color, usually red and white. There are red-and-white nacreous varieties that give it a mother of pearl color called ‘sakura nishiki’ and there also calico nacreous colored ranchu goldfish that are called ‘edo nishiki’.