Producing a Nature Aquarium for the Long-Term Maintenance

Amano Aquascape Design and AmanoTranslated by Tomoko Schum Takashi Amano advocated the long-term maintenance of Nature Aquarium aquascapes. Thirty years ago, the technology to efficiently grow aquatic plants was still in its infancy, and layouts using them generally looked best right after planting. However, Mr. Amano’s intent in developing any Nature Aquarium aquascape was to plan how it would look after the plants developed and changed from their original size and shape from when they were first planted. He would create the layout so that it would grow into a beautiful arrangement over time, and then maintain its appearance for up to several years. Aquatic plants started growing more efficiently after substrate materials and lighting improved, and a CO2 injection system was developed later on. However, overgrowth became a new problem. Densely grown aquatic plants not only fill open space and spoil the beauty of an aquascape, but they also prevent light from reaching the lower part of plant stems, which affects their condition and can eventually result in their demise. The flow of water also becomes affected and can lead to a proliferation of algae. The regular trimming of aquatic plants using scissors specially designed by Mr. Amano alleviated this ongoing concern. Also, when necessary, plants were pulled out, cut to a proper length, and then replanted. The development of these maintenance techniques made it easier to sustain an aquascape over longer periods.

Mr. Amano was not completely satisfied with the advancements he had made, so he kept working to design a type of layout in which a beautiful aquascape could be maintained without too much effort. Two methods of expression—the use of cosmetic sand and a form of creative plant arrangement called sozo haishoku—came from this pursuit.

Cosmetic sand, which is a fine river sand, is primarily utilized in the foreground section of a Nature Aquarium layout. Short underbrush plants, such as Glossostigma or Cuba pearl grass, are also typically placed in the foreground. These plants tend to grow horizontally instead of sending shoots upward. Leaves and roots pile on top of each other over time and form a thick mat. If left unchecked, the leaves and roots on the bottom tend to turn brown and deteriorate, leading to cyanobacteria outbreaks. To prevent this condition, they need to be trimmed on the surface to keep them from getting too thick. If one of these plants stops developing new shoots well, it must be pulled and its top portions replanted. If this task is neglected, it becomes difficult to maintain an aquascape long term.  Mr. Amano devised the use of cosmetic sand instead of underbrush plants for the foreground specifically for this reason; it spared the aquarist from having to continuously trim and rejuvenate aquatic plants through replanting. Additionally, this type of sand is easy to keep clean by siphoning out detritus that collects in it during water changes.

Sozo haishoku is a method used for long-term maintenance of an established composition. While sozo haishoku is similar to the process of rejuvenating plants through cutting and replanting, it dramatically changes the impression of an aquascape because aquatic plants are replaced with different ones after the originals are pulled out. While performing sozo haishoku, the removal of as much old substrate material as possible along with the plants promotes better growth and enables the aquascape to be maintained for longer periods. The impression of an aquascape may be drastically altered by sozo haishoku, but its composition of does not change because the framework comprising stones and driftwood remains the same. For this reason, the composition materials must be arranged very securely in any layout intended for performing sozo haishoku. If they are not, it will collapse in the process, making the practice pointless.

Well suited for long-term maintenance, the aquascape featured in this article has undergone sozo haishoku. Cosmetic sand was placed in the foreground, and sansui stones and branch wood were arranged securely as layout materials. These stones have the fine surface texture characteristic of lava stones, which allows them to stay firmly together when stacked. Branch wood has multiple limbs coming from its base, and placing just a few of them together can present an intricate appearance. Creating a planting space by stacking sansui stones and arranging some branch wood produces a composition that will not collapse when sozo haishoku is performed. The aquatic plants in the center were primarily stem plants before sozo haishoku, after which the impression of the aquascape was altered by adding more tape-shaped aquatic plants, yet another technique that makes it easier to maintain an aquascape for a long period of time.

Tales from the cafe 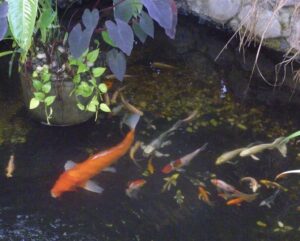 If you remember I mentioned that we had a fish... 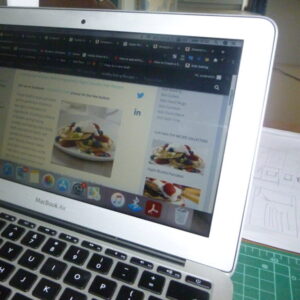 I have not worked on the project for the last... 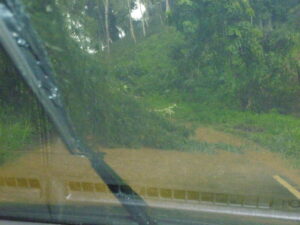 Caught in storm coming back from coffee