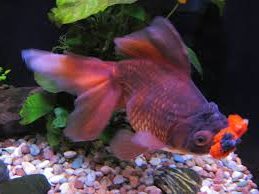 The pompon goldfish is named after its most obvious feature, its fleshy lobed nasal septa that resemble pompons. These growths are connected to the goldfish’s nasal septum and act as sensors for smelling airborne chemicals and odors. When fully developed, the pompon lobes can hang down into the mouth of the goldfish but in a quality specimen the pompon lobes should not hang down into the mouth. They should have a solid uniform growth and be spherical in shape.The body of a true pompon goldfish should look like the body of ranchu types without a dorsal fin. There are however breeds that have a dorsal fin or show signs of a wen head cover. Pompon goldfish come in metallic and calico colors.Pompon goldfish are best suited for goldfish aquariums with water no colder than 55*F and should not be placed in an outdoor pond. Tank mates should only include other delicate and slow-moving breeds like the telescope, oranda, bubble eye or celestial.