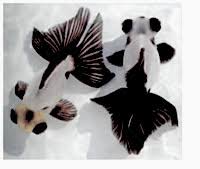 They can also lose their color with age to become orange and white or any other color combination. Frequently, the Panda Moor may change their color and turn pure white. They are adapted to cold water just like all other goldfish.

The most distinctive characteristic of the this fish are their eyes. Their large eyes are set on top of a long telescope or cone-like stalks mounted on the sides of their heads. The Telescope Goldfish are being named the Dragon Eye Goldfish or Dragon Fish in China, and later in Japan, the Japanese named it as Demekin until today.

They come with a rounded or egg-shaped body with a fancy tail. It is similar to the Fantail Goldfish except for its telescoping eyes and are smaller in size. The body is short with a wide head and a split caudal fin that is moderate in length and slightly forked.

They also available in many different colors. These include solid red, blue, chocolate, or white; tri- color and calico. Bi-color version are red/white and black/white. The bi-color black/white version is affectionately known as the Panda Telescope Goldfish and it is one of the unique chocolate version.

Size And Lifespan Of The Fish

Panda Telescope goldfish itself rarely exceed 12.7cm when kept in home aquarium, however, can grow up to 12.7cm if given optimal conditions.  Lifespan- This fish can grow up to 15 years. Their average life span is 10 – 15 years but they have known to live 20 years of more when well maintained and grow in the length of 20.32cm.

Due to the telescope’s poor vision, they should not be mixed with more active goldfish varieties, and should not be housed in an aquarium with sharp or pointed objects which may damage they eyes. This fish is very hardy and does not need special care. Panda Moor Goldfish. The Telescope Goldfish has a deep body and long flowing fins. They have the same needs as the Black Moor.

Similar to the Bubble Eye Goldfish, the Telescope Goldfish are omnivores. They eat all kinds of fresh, frozen and flakes food every day. As they are also not a good food competitors, they need longer time to be fed. They feed mostly on brine shrimps, bloodworms, daphnia or tubifex worms.

Live or frozen food are good but they must be freeze-dried otherwise they contained parasites and bacteria which may cause infection if these food stayed longer in the aquarium. Overfeeding the them is not advisable and is dangerous to your fish because uneaten food left in the tank will rot and pollute the water. Only feed as much food as your fish will take for about five minutes. Food can be given perhaps three times a day for aquarium fish throughout the year.

Goldfish are cold water fish and is a nature of the temperate region, so the best temperature is between 18 – 24°C. Too cold a temperature will result in the fish having Ich or white spot. However, there is no guarantee that everything is perfect, and so the fish keeper must know how to recognize the diseases.  Select healthy fish for your aquarium when you buy them from pet shop or stores.

Some bacterial infection include Dropsy, Tuberculosis, tail /fin rot, fungus also called fungal infection and black spot or black Ich, which is a parasitic infection. To prevent them from getting these diseases, acclimatized the temperature when introducing them to your aquarium. Bacterial infection such as fin or tail rot can be caused by a number of factors too.

There are some medications where fish keeper can buy from the pet shop or fish stores to treat them according to the manufacturer’s instructions. Other miscellaneous ailments include cloudy eyes which can also be caused by poor nutrition, bad water quality and rough handling. Fish also have constipation indicated by loss of appetite and swelling of the bellywhich is always the caused of diet.

Wounds can develop and become infected creating ulcers and fungal infections and these must be treated immediately otherwise it can be fatal.

Where can I get Panda Telescope Goldfish that for sale?

The deep black color spread right to the edges of the fins but the eyes of this variety protrude from its head. These goldfish are inexpensive and affordable.