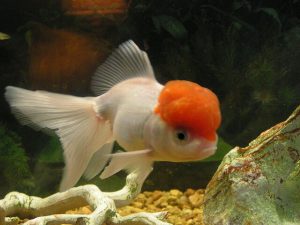 The Oranda Goldfish variety is one of the fancier types of goldfish, making orandas one of the more difficult fancy goldfish breeds to take care of. They don’t do well in waters with a temperature less than 65 degrees which doesn’t make them suitable for your outdoor goldfish pond. It is best to place them in your goldfish aquarium with other slow-moving fancy breeds and a few aquatic plants. Due to its body shape, oranda goldfish are slow moving and should be feed a balanced diet to keep it from having swim bladder or constipation problems.Breeding the oranda goldfish is another challenge for goldfish breeders. It is difficult to determine the sex of orandas out of mating season but typically, males are smaller and slenderer than females. During mating season, it is easy to sex them; males produce white dots on the hoods on their heads. (Don’t mistake this for goldfish ich.) If breeders are successful in mating two oranda goldfish, it is rare to get high quality fry.A high quality oranda goldfish will have a short deep body, about two thirds of its body length. The dorsal fin should be up high on its body much like the ryukin goldfish. All other fins should be long flowing and paired. The caudal should be divided and flow gracefully like the veiltail goldfish and have slightly squared trailing edges. Depending on which geographical location the oranda was bred, its caudal tail will look different. For showing purposes, the caudal tail should be deeply forked in the far east, but points are deducted for this in the west.An oranda goldfish is easily recognizable by its soft wart like hood cover around its head. As they mature these hoods should develop around its head and face. Some orandas will develop more and some might not develop any. A good hood will have lumps of similar size that cover the entire head back to its gills.The colors of the oranda goldfish are varied: metallic, solid (self-colored), multiple colors (variegated) or calico. The redcap oranda goldfish should have a deep red hood and a silver body. Other colors include: black, blue, chocolate, reds and silvers