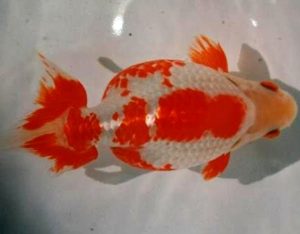 The Izumo Nankin goldfish is a rare breed of goldfish native to southwestern Japan. It is very difficult to source individuals outside Japan, but Nankin are commonly available there. This breed has many fanciers in its native country, with many clubs dedicated to it such as the Central Nankin Lovers Association. The Nankin is a top-view fish and typically comes in a red and white coloration. The body form resembles a dorsal-less ryukin goldfish with a ranchu-like tail. The tail possess a partial fusion. When viewed from above the head, the body resembles a triangle.

The Nankin originated between 1748 and 1750 in the area of modern-day Shimane Prefecture. It was developed from the Marco Goldfish, which is also an ancestor of the Ranchu. It became a registered breed in Shimane Prefecture in 1982.

Caring of the Izumo Nankin goldfish is difficult, because it is not constitutionally strong. Currently the fish is only available in it’s native country, and it is difficult to acquire because it is hardy distributed. The fish is generally unknown, except within Shimane Prefecture. However, review full breed profile of the Izumo Nankin goldfish in the following table.

From Wikipedia, the free encycloped.

[TABS_R id=2079
More posts in the category
The Imperial Goldfish
One might thin...
Goldfish
The goldfish&nbsp...
Lionhead Goldfish
By Lawrencekhoo ...
Celestial Eye or Chouteng...
By JasonMarini ...
Veiltail Goldfish
The veiltail goldfish is ...
The Tancho single-tail Co...
from marinelifein...