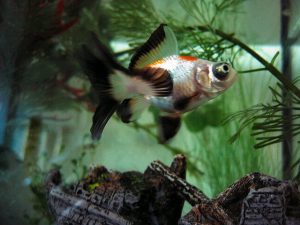 The Telescope Goldfish or globe eye goldfish as it is known in Europe and dragon fish in the far east is a fancy goldfish type. Protruding eyes that begin to develop around six months of age clearly explain the name of this fancy goldfish breed and make it easy to recognize if a goldfish is a telescope. A high-quality telescope goldfish has good symmetrical placement of its two eyes, each located on the outer most tip of its globe shaped protuberance.The body resembles that of the veiltail goldfish, with a short deep rounded body. Aside from the single dorsal fin, all the telescope goldfish’s fins are paired and pointed, including the caudal tail fin. The dorsal fin is high on the back with a slightly elevated appearance similar to the ryukin goldfish When the telescope goldfish swims, the dorsal fin should sturdy and upright.The fully divided caudal fins should be about three-quarters the length of the telescopes body and forked about a quarter of the overall length of the caudal tail fins. When it swims the caudal tail fin should be flowing like the oranda goldfish.The telescope goldfish comes in a variety of colors: all one color (self-colored) of red, blue, chocolate, or white; bi colors (variegated) of black/white and red/white; and calico. The calico types should have a blue background with a good symmetrical balance of bright brown, orange, red yellow and violet patches, with small black spots over its entire body. There is a variety that is named a panda butterfly telescope since its colors are predominately black and white and there is also the popular broadtail moor or black moor goldfish.The telescope goldfish is hardy and can survive in cold waters, but it really should not be kept in an outdoor goldfish pond. The main reason is that is has poor vision and can’t compete with other goldfish types for food. Another reason, which also has to do with their protruding eyes, is that telescope goldfish eyes are susceptible infection and injury. Make it a rule to only place these goldfish among other slow moving or delicate breeds.