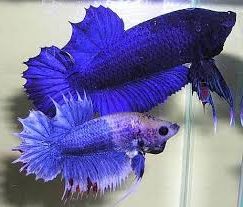 The Siamese fighting fish, or a betta tropical fish, is a vibrantly-colored fish often seen swimming solo in brandy sniffers and ornamental vases in both the office and home. But do these small, aesthetically-pleasing fish bowls provide a healthy environment for the fish? Is the popular betta bachelor in need of a companion or is it better off living alone?

The betta was first discovered in Southeast Asia. Making its home in rice paddies, drainage ditches and the warm flood plains of the region, the betta became accustomed to frequent storm flooding and devastating droughts. The cyclic, drastic changes in its environment helped the fish to adapt – becoming a true labyrinth fish. A labyrinth fish has the unique ability to breathe oxygen directly from the air and also take in oxygen from its gills. As a result, bettas and other labyrinth fish can survive for short periods of time out of water and if needed, can inhale the air around them (provided they stay moist.) This also explains why a betta can sustain itself in stagnant, oxygen-deficient water. Although bettas can tolerate small spaces and poor water quality, they do best in small aquariums (at least two gallons) with regular water changes. The preferred water temperature for a betta is 76-82 degrees F.

How Betta fish got their name

The betta got its name from an ancient clan of warriors, called the “Bettah.” The fish were given a combatant name after the fighting fish became popular in the mid-1800s. In fact, the sport became so renowned in Thailand that the former King of Siam had it regulated and taxed! Spectators of the sport based their bets on the bravery of the fish, rather than the damage inflicted by the victor.

Bettas have upturned mouths and primarily feed on the water’s surface. A good diet consists of dried bloodworms, brine shrimp or daphnia. Commercial betta food or pellets are best because it combines all three foods, in addition to vitamins and minerals. This improves the betta’s brilliant coloring and longevity. It is a common misconception that peace lilies or plant roots grown out of “betta vases” can sustain the fish. Nothing could be farther than the truth! Bettas cannot survive on plant roots and need a diet high in protein and fiber to survive.

Bettas, unlike other species, are not schooling fish and will fight with each other, regardless of gender. Bettas prefer to swim alone and also need a comfortable place to hide. Aquatic caves or dense, planted corners work great in making a betta feel safe.

When cleaning a betta’s tank or bowl, make sure you only take out a third of the water each time and replace it with fresh water. This will gently allow the fish to adjust to the temperature and pH of clean water – while not upsetting the biological balance of the fish’s environment. This should be done about every three or four days for small bowls or tanks. If your water has a high level of chlorine in it, you may need to add a drop of declorinator to the tap water before adding it to the tank or bowl. And never use soap or disinfectants to clean off fish ornaments or decorations. This will harm the fish. Plain warm water will work just fine for cleaning these items. You can also use a small turkey baster to siphon debris from the bottom of the tank. This will prevent excessive ammonia and bacteria from building up.

Bettas prefer slightly acidic water (pH 6.5 to 7) and warm water. Cold water can suppress the immune system and cause illness.
Bettas have several different tail shapes – the most common being the “veil tail.” Other tail shapes include the “half-moon,” “double tail,” “short-finned fighting-style tail” and “crown tail.”
Bettas normally live 2 – 3 years, but there have been a few cases of bettas living well into their teens.
The betta is known as “plakad” in its native Thailand and has often been referred to as “The Jewel of the Orient.
https://www.youtube.com/watch?v=EQunLEYgjKUsu_divider size=”1”]

Betta albimarginata is a species of betta fish, endemic to the island of Borneo where it is only found in the Indonesian province of Kalimantan Timur. It inhabits the shallows (5 to 10 cm (2.0 to 3.9 in)) of forest streams amongst vegetation and debris along...

Keeping and caring for Betta fish

By: Mike Magnum Keeping and caring for a betta is not difficult. It just takes a little time on your part to research them before you buy them to make sure that you can... 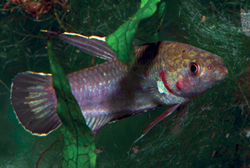 The bold and beautiful Betta Rubra

Author: Joshua Wiegert While most aquarists know only the eponymous betta, Betta splendens, the genus Betta contains some 70+ species. Most of them are overshadowed by their famous cousin, often simply called “the betta,” particularly... 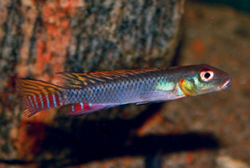 Nanochromis splendens: A Splendid Discovery Author: Gary Elson A rare dwarf cichlid hailing from the Congo River, the diminutive Nanochromis splendens surpasses its reputation as being a wonderful hide-and-seek cichlid that amazes hobbyists with its...