By Andy Gordon of England, and Michelle Stuart of Ontario Canada 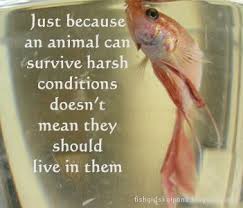 There are many different ways to treat animals inhumanly. The easiest to detect is cruelty through violence or neglect. Putting any animal through such treatment is condemned, and rightly so, without question or hesitation. But what about animals that suffer simply because the owners don’t know any better? Is that any better fate for an animal to go through? – after all, the owners didn’t know they weren’t providing the proper care for their animals. So often this issue is brushed aside with a shrug, saying that they really tried to care for the animals, or that they had good intentions!

Fish tanks have been around for so long that one has pretty much become a commonplace fixture in many homes. Nearly everyone can remember a time when they had a tank in the house or visited a friend who had a tank. Since fish tanks are so commonplace, a lot of people tend to underestimate the care and dedication required keeping a tank healthy and thriving. Too many people, who have never had fish, believe that fish keeping is the simplest of hobbies, just add water and go!

The most common time for fish to be placed in inadequate conditions is when hobbyists are starting up their very first tank. They are unaware of the need for cycling the tank and going slowly to allow for the required bacteria to grow in the tank, and the fish seem to die for no apparent reason. They stock the tank too quickly since they want an instant showpiece for their home.

The second most common mistake people make is to overstock their tanks. They want to see huge schools of fish living happily side by side without any room for movement, and don’t know that most of the fish they purchase are juveniles that will grow to many times their current size.

Other examples of cruelty through ignorance include common mistakes like:

The easiest way to combat cruelty due to ignorance is to learn as much as you can about your tank, the fish you wish to keep, and the requirements to keep the fish healthy, and then share as much information and experiences, whether good or bad, as you can with other hobbyists. There are many different inexpensive, reliable resources available to hobbyists, so that fish should not have to suffer because people didn’t know any better! In this hobby a little research goes a long way in keeping fish healthy, and in the end it will greatly increase the enjoyment people find when keeping fish.

Tales from the cafe