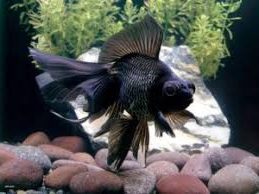 The Black Moor is known for it’s telescoping eyes and obscene physical body traits. It is one of the most popular goldfish in the aquarium industry. It’s important to urge some very important topics when taking care of black moors. Having the proper supplies and setup to replicate their living environment is a MUST.

These fish have heavy eating habits and will eat all day long when given the opportunity. The saying “what goes in the body, must come out” explains this nicely.. Goldfish by nature have a lot of waste product (poop).  Plan on figuring out a good way to filter your water in as many ways a possible. Most beginners use “hang on the back” filters. The Aquaclear 110 has been the best HOB filter on the market for a long time. I highly advise it! Here is an Amazon link:

A lot of people think that you never have to change the water in their fish tank.. that’s WRONG! You should change a percentage of your water on a routine schedule. I highly advise getting a “water changer”.. they are somewhat new technology. It hooks up to a sink or faucet and it pulls water out of your aquarium and also fills the aquarium with the flick of a switch!

Anything smaller than a 40 gallon is pretty small for goldfish. You will find that most goldfish keepers that get super serious about keeping goldfish buy very large tanks.. like 75 gallon and up. Fact of the matter is.. goldfish are very messy fish and the larger volumes of water spread out that waste more.

The Black Moor is one of the slowest swimming goldfish species due to it’s obscene physical characteristics. Because of it being a slower swimmer, it’s owner must account for this when it comes to feeding time.

If you have other goldfish in the same tank as this slower swimmer, the fast swimmers will eat most of the food. This is why tank mates for this goldfish should in fact be within the same swimming speed range as the Black Moor. The best tank mates for the blackmoor are other slow swimming goldfish like the Ryukin and almost any fancy goldfish.

The species of goldfish are very big eaters and they love eating 24-7. The most common food they are fed in aquariums is flake food. It gives a descent number of vitamins but they do lack other nutrients while only being fed flake food. Goldfish love eating all categories of the food chain. In natural habitat, they will eat everything from insects to algae. The BEST for your fish is to feed a variety of foods. Here is a top quality brand on Amazon:

Its important when finding tank mates for your fish that you dont choose a fish that is too fast. If the other roommate swims too fast.. that means it will eat all the food before the slower blackmoor can get any. Different species and types like the faster Comet species or Shubunkin are not good roommates. But you can read on that in our tank mates section.

In natural outdoor habitat, the Black Moor doesn’t do so great feeding because of it’s poor eye-sight. It is tough to find food when you can’t see that great. Just another reason why these fish thrive in aquarium habitats where the food can be handed right in front of them by their generous owners. They are sometimes kept as pond fish but do best in aquariums.

As you can see, the Black Moor has some pretty different physical characteristics and it’s pet owner needs to account for this when it is swimming around all day and night in its aquarium. The Black Moor has telescope eyes and they can easily be hit on things due to their swimming nature.

The eyes of this fish are what make the appearance of the fish stand out so much. The round protruding style of them make this fish look as if its body is formed around the eyes. What most beginners dont know is that these large eyes actually have horrible eyesight. Doesnt make much sense ehh?

Goldfish have the highest death rate among all other aquarium fish. I believe the reason to that being the size of tanks people use. It’s very common for beginners to misjudge what size goldfish actually need. I do understand the fact that they call these bowls “goldfish bowls” but that’s very misleading. Considering a bowl is way to small for any species of fish.. there needs to be a tank setup at bare minimum. People hate hearing this.. but even a 10 gallon tank is too small. Absolutely too small, no way around it.

*Update: Im not telling you to go buy a $700 aquarium get on Craigslist and find a cheap used one! Im getting lots of emails from people I cant afford a large aquarium I understand that. Go to your local Goodwill or garage sales there are tons of cheap deals out there on tanks!

There fish will eat until they have made themselves sick. They are searching for food every second of the day they aren’t sleeping. Mix that with a feeding competition level if you have more than one goldfish. Compare it to living in a  large family. When dinner is served, you have to fend for yourself and eat crazy fast or you will go hungry. Goldfish feed the same exact way all the time. Be aware of this and try to keep an eye on the portions they are consuming so they don’t overdue it. However much food they can consume in 3 minutes is a good portion. Opinions differ on how much or how often to feed them.. I personally feed my fish once a day. Remember this saying a hungry fish is a healthy fish!

Guess what? The average goldfish dies in less than 6 months of its owner having it. That’s a crazy thing to fathom. Proper care is the main reason these poor goldfish are dying. First, the owner puts the fish in a small bowl and then doesn’t change the water daily and… the fish dies of lack of oxygen. Lets take this fish care serious today. Back on topic here, goldfish can easily live for up to 10 years long and I’ve personally seen it over and over. They are close cousins to the carp fish and carp also live long lives of 10+ years.

The Blackmoor doesn’t come in any other colors besides the dark black. The name actually derives from the cosmetic color of this fish of you could ever expect that (sarcasm). Some wonder if breeders will be able to manipulate that black color to create a spectacular white or orange body style. Sick Blackmoors will hold a white tint to their velvet black.

Most think that because this species has such large telescope eyes that it has great vision. Horrible vision is a good way to describe their eyesight. Such bad vision makes this goldfish species almost impossible to survive in the wild on its own. Slow movement to their found food and running into objects doesnt make for an agile creature. A goldfish will learn and remember its tank surroundings but as far as vision is concerned.. Very poor quality. Another reason faster tank mates are a bad idea. They eat and find all the food before the Blackmoor.

The common misconception is that goldfish only eat flake food. A fish is never going to receive all the nutrients it needs from one food. Change things up a bit once and a while and feed your goldfish something different. There are endless types of flake food for goldfish.

Switch brands, switch flake sizes.. You can also cut up small pieces of fruits and vegetables for your goldfish. The Blackmoor has better luck with floating food at times because of its swimming tendencies. You will notice a Blackmoor wiggles more than other goldfish as far as swimming.

For such a beautiful fish with delicate appearances, the Blackmoor is actually quite cheap. On average, $5 to $20 is what you can buy one for. They are not tough to find. More than likely, all pet stores in your city will have them. They are super popular with a high demand. This fancy goldfish will not break your wallet sort of say.

The Blackmoor cannot be housed with just any other fish. Not because they are aggressive towards others but because they swim a lot slower than other fish. Blackmoors are actually some of the most friendly fish in the world. I would advise keeping them with other Blackmoor species. The swim speeds work out great. Other slower goldfish in the fancy species will work as well. If you house fish that swim at different speeds that eat the same food, just separately try to make sure each of them consumes a valuable amount of food come feeding time.

Where to Buy Black Moors?

This species of fish is super popular for the beginner aquarist. I saw a poll not to long ago and it was voted the most desirable beginner fish. I think thats awesome in a way and not so awesome in other ways. For one, beginners usually kill fish because they are beginners and have no idea what they are doing. Secondly, they are most likely being put into fish bowls because beginners are not educated to know that these fish should be in descent size tanks.

Fun fact of the day. Goldfish are a close cousins to Koi species of fish. This is a bit scientific for us but.. the goldfish and koi fish can mate together but the eggs are known as sterile. Somewhat of a head scratcher to end our list. Koi fish can also make for great aquarium fish too. They do grow a bit larger but are very comparable to goldfish.

This one is easy. When you sign up to own a pet, you need to stay in it long term. After 3 years of owning your goldfish, things will get boring and it will loose its touch. I can understand that but don’t make the fish suffer with you not properly caring for it. Either change things up to bring the spunk back into the hobby for you or just plain give it away to a younger child. Kids love getting new pets like that. That is the better route than lacking to give the fish proper care and having it die.

Species of goldfish are very big eaters and they love eating 24-7. The most common food they are fed in aquariums is flake food. It gives a descent number of vitamins but they do lack other nutrients while only being fed flake food. Goldfish love eating all categories of the food chain. In natural habitat, they will eat everything from insects to algae. For your aquarium goldfish, you should get into a rhythm of feeding them other things besides flake food. Vegetables and fruits are great additions to their diets. It brings fiber to their diet which is needed due to their common issue dealing with constipation.

It’s important when finding tank mates for your fish that you dont choose a fish that is too fast. If the other roommate swims too fast.. that means it will eat all the food before the slower blackmoor can get any. Different species and types like the faster Comet species or Shubunkin are not good roommates. But you can read on that in our tank mates