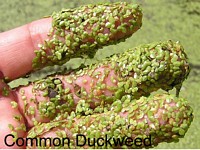 Common duckweed (Lemna minor) is a very small light green free-floating, seed bearing plant. Duckweed has 1 to 3 leaves, or fronds, of 1/16 to 1/8 inch in length. A single root (or root-hair) protrudes from each frond. Giant (Spirodela polyrhiza) or big duckweed is still relatively small (1/16 to 1/4 inch) with 1 to 4 leaves, or fronds, light green in color. Three or more roots (or root-hairs) protrude from each frond. Duckweeds tend to grow in dense colonies in quiet water, undisturbed by wave action. Often more than one species of duckweed will be associated together in these colonies and can be an aggressive invader of ponds and are often found mixed in with other duckweeds, mosquito fern, and/or watermeal. If colonies cover the surface of the water, then oxygen depletions and fish kills can occur. These plants should be controlled before they cover the entire surface of the pond.

Dense duckweed colonies provide habitat for micro invertebrates but if duckweed completelycovers the surface of a pond for an extended period it will cause oxygen depletions. These colonies will also eliminate submerged plants by blocking sunlight penetration. Many kinds of ducks consume duckweed and often transport it to other bodies of water.

Duckweed is often used as a plant in both coldwater and tropical aquarium as well as in outdoor ponds, though Duckweed must be frequently cut back because of its rapid growth rate and may be considered a pest. It is also grown as a commercial crop for animal feed, primarily for fish and poultry, as it is fast-growing and easy to harvest by surface swimming.

Duckweed shades out other plant species below it by covering the whole surface of the top of the water. It absorbs much of the surrounding resources as possible so that it has the energy to grow and reproduce.

The following is what some people say about Duckweed.”Duckweed is a good food for your fish so if you have a pond with nothing else (but fish) in it, and you don’t want to buy fish food then I would say use duck weed. But for the common pond owner they usually like to keep all kinds of species in their pond so it would be best not to use Duckweed.”

Duckweeds can be removed by raking or seining it from the pond’s surface.

Grass carp will seldom control aquatic vegetation the first year they are stocked. Young grass carp will consume duckweeds but are usually not effective control as large fish (over 10 pounds). Grass carp stocking rates to control duckweeds are usually in the range of 7 to 15 per surface acre or higher.

Tilapia will consume watermeal but are a warm water species that cannot survive in temperatures below 55° F. Therefore, tilapia usually cannot be stocked before mid-April or May and will die in November or December. Recommended stocking rates are 15 to 20 pounds of mixed sex adult Mozambique tilapia (Oreochromis mossambicus) per surface area. Tilapias are often not effective for vegetation control if the pond has a robust bass population due to intense predation.

Ducks will eat duckweeds but seldom control them.

Chemical control
The active ingredients that have been successful in treating duckweeds are diquat and fluridone (fluridone is excellent for ridding your pond of Duckweed).